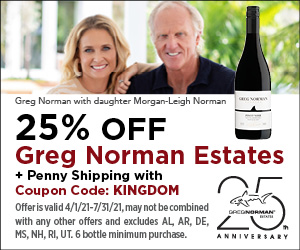 St. Johns Insurance Company and its parent company, St. James Insurance Group, are proud to announce a three-year partnership with PGA Tour professional Sam Saunders, the grandson of Arnold Palmer. As part of this partnership, St. Johns Insurance Group is making an annual financial commitment to the Arnie’s Army Charitable Foundation through the “Birdies for Babies” campaign, in which the insurance company will commit to donating specific dollar amounts to Arnie’s Army for each birdie, eagle and hole-in-one that Saunders makes during the 2018, 2019 and 2020 PGA professional seasons.

Based in Orlando, Florida, St. Johns Insurance Company is a privately held company specializing in homeowners’ insurance products and services for residents in Florida and South Carolina.

“We are so happy and proud to have Sam on the St. Johns team, and to now officially join the Sam Saunders team. Arnold Palmer and the Saunders family have been the ultimate role models for us, both personally and professionally. We are delighted to continue our relationship with Arnie’s Army Charitable Foundation and the charitable causes so close to Mr. Palmer’s heart, and now to see St Johns positioned so close to Sam’s heart,” said James McCahill, St. Johns Insurance founder and former Chairman.

The mission of the Arnie’s Army Charitable Foundation is to ensure that every child—especially those facing challenges—has the opportunity to live a “Life Well Played.” Following Mr. Palmer’s passing in 2016, Arnie’s Army now carries on the good works he started under the aegis of the charitable foundation he and his family established.

“Throughout his life, my father cherished friendships with those who shared his commitment to enhancing the lives of others – especially vulnerable children. He would be so pleased to see a continued association between our family and the McCahill family through this charitable partnership between my son, Sam Saunders, and St. Johns,” said Amy Palmer Saunders, daughter of Mr. Palmer and chairwoman of the Arnie’s Army Charitable Foundation.

“Arnie’s Army provides financial support to institutions and organizations that support the health and wellness of children, youth development, and nature-focused wellness initiatives. The ‘Birdies for Babies’ campaign will be used to support programs at both the Winnie Palmer Hospital for Women and Babies as well as the Arnold Palmer Hospital for Children in Central Florida.”

Saunders, 31, was born and raised in Orlando and turned professional in 2009. He grew up playing alongside his grandfather, but his earliest personal golf memory is of making his first hole-in-one with his dad watching nearby. Today, he enjoys carrying on the legacy of his grandfather by giving back to the hospitals that bear his grandparents’ names, so it only seemed fitting he’d want to take part in the “Birdies for Babies” campaign.

“It’s an honor to continue the long-standing relationship with the McCahill family and St. Johns Insurance,” said Sam Saunders. “I am looking forward to tying my on-course performance to donations to the Arnie’s Army Charitable Foundation. It gives me even more incentive to perform throughout the year knowing that my game can make an impact on the lives of others.”

For every birdie that Saunders makes, St. Johns Insurance Company will donate $100 to the Arnie’s Army Charitable Foundation. For every eagle he makes, they will donate $500, and for every hole in one, the donation rises to $5,000.

The “Birdies for Babies” initiative represents a continuation of the partnership between St. Johns Insurance Company and the Arnie’s Army Charitable Foundation. Last year, St. Johns Insurance Company completed an additional million-dollar gift to the Arnie’s Army Charitable Foundation, which was used to fund an infusion center at Arnold Palmer Hospital for Children.

St. Johns Insurance Company is a privately-held insurance company that insures home and condominium owners throughout the states of Florida and South Carolina. The company’s mission is to provide agents and policyholders with access to a high-quality, financially stable insurer that will be a reliable market over the long-haul. Headquartered in Orlando, Fla, St. Johns is rated “A” exceptional by Demotech, an organization that ranks and monitors insurance companies for financial stability.

St. James Insurance Group, the parent company of St. Johns Insurance Company, is an MGA/Insurance Program Manager specializing in personal lines and commercial lines products. St. James, which is privately owned and managed, was established in 1984 under the name Braishfield Associates Inc. St. James distinguishes itself by designing insurance programs in difficult or catastrophe-prone regions. These nationally recognized insurance products are placed with only the highest-quality insurance carriers. The firm can provide a range of services for their carrier partners, including policy processing, underwriting, claims and marketing. Through these selected partnerships, St. James offers agents excellent infrastructure support in administration, service, and claims adjudication to improve their efficiency and effectiveness in handling business.