It was 1962 when golf’s four gilt-edged major prizes were claimed by Arnold Palmer, Jack Nicklaus and Gary Player between them.

It was 1962 when golf’s four gilt-edged major prizes were claimed by Arnold Palmer, Jack Nicklaus and Gary Player between them.

ow 60 years ago, it was the only year in which these three legends swept the major spoils and it spurned the indelible tag of “The Big 3”, as they have been known ever since. Robin Barwick has been scrolling through the archives

There was serendipity to the World Series of Golf in September 1962 at Firestone CC in Akron, Ohio. They could not have hoped for a better line-up for the inauguration of this high-stakes showdown between the year’s major champs. Arnold Palmer was Masters and [British] Open champion, Jack Nicklaus had won the U.S. Open and Gary Player took the PGA Championship. The World Series was designed for four golfers but on this occasion they settled for three.

That first World Series of Golf was a portent of the new order taking hold in at least two ways. First, with Nicklaus a major champ for the first time that June—having only turned professional in December 1961—a fascinating three-way battle had quickly emerged for golf’s pre-eminence between a trio of quite distinct characters.

Golf’s new triumvirate came to the fore just as live sports broadcasting was picking up momentum of its own, and the TV networks realized golf’s potential on the small screen. NBC sent a 50-man, nine-camera outdoor broadcast crew to Akron to provide live television coverage of the World Series of Golf in multi-color. Producer Perry N. Smith told reporters: “For one thing, this is the biggest color remote broadcast ever attempted”.

In Denver, though, they were incensed. While the regular PGA event that week—the Denver Open Invitational at Denver Country Club—offered a first prize of $4,600, the World Series of Golf blew Denver out of the water with a first prize of $50,000. Even the Masters—with the most generous winner’s cheque among the four majors—could offer only $20,000. Noble Chalfant, organizer of the Denver Open, was naturally demoralized that his event was deprived the three biggest names in golf. He threatened legal action against the PGA of America and derided the controversial World Series of Golf as “an exhibition and not a legitimate tournament”.

It was also around this time, September 1962, that newspapers started to describe the three rivals as “The Big Three”.

“Big Three at Firestone” ran the headline in The Evening Independent in Massillon, Ohio on September 6, two days before the event. “GOLFDOM’S BIG THREE”, ran a caption in the Fort Lauderdale News on September 8.

“PALMER, PLAYER AND NICKLAUS—GOLFING’S BIG THREE…” exclaimed the caption in the Akron Beacon Journal on Sunday, September 9, between the two rounds of the World Series.

On the golf course at Firestone and hinting at his subsequent dominance of the world game, 22-year-old Nicklaus outshone his more experienced rivals over 36 holes. Palmer posted a course record 65 in the first round but faded with a 74 in the second. Nicklaus finished on 135, five under par and four ahead of his rivals.

In the Cincinnati Enquirer on September 11: “If the ‘World Series of Golf’ means anything, it has to mean that Nicklaus, winner of the 36-hole test matching the game’s Big Three here Sunday, has taken over the throne at the ripe old age of 22”.

(Palmer would have taken issue with that bold statement but that is another story.) “The Big Three” moniker was here to stay.

Alastair Johnston works for marketing giant IMG, the company founded by Mark McCormack and built on his work representing Palmer, Nicklaus and Player.

“The World Series of Golf in 1962 was a big deal,” starts Johnston, who worked closely with Palmer and Player in particular. “It was at around this point that these three golfers began to enjoy total domination.”

McCormack shook on a deal to manage Palmer’s affairs in 1961—an arrangement that lasted the rest of their lives. Player and Nicklaus then emerged as Palmer’s closest, fiercest rivals, but there was also a strong affinity between the three men and Palmer cleared the way for both Player and Nicklaus to work with McCormack in 1962.

“The Big Three” moniker was tattooed on the American consciousness when McCormack negotiated the eight-part “Big Three Golf” TV series, which began broadcasting nationwide in the United States by NBC in spring 1965. There were other high-ratings TV matches but “Big Three Golf” was the biggest hit. The three golfers played each other at a series of spectacular courses including Los Angeles Country Club, Firestone, St Andrews and Carnoustie in Scotland, and onto Dorado Beach in Puerto Rico. The ratings soared.

“Our rivalry happened at a time when golf was just beginning to take deep root in the broader American sports psyche,” Palmer later said. “The intensity of our competition, as well as the distinct differences in our personalities, created tremendous natural drama and a fan interest in the professional game that had never been seen before.

“I needed Jack to remind me what my Pap had warned me from the beginning; there was always going to be some talented young guy out there who could beat you 10 ways to Sunday, so you’d better never let your guard down. I think Jack needed me to serve as the high standard he was aiming for. If he could beat me, which he ultimately did, he could beat anybody and become the greatest player in the game.”

Once “The Big Three” became, in 1962, its repetition spread like wild fire. Those 1962 majors were the kindling and that elitist and excessive “exhibition”—the first World Series of Golf—was the spark.

In 1962 Palmer, aged 32 at the time, was in his captivating prime, but to put the 1962 Masters into context, the story begins 12 months earlier, with a Masters remembered mainly for Palmer’s double-bogey six at the 72nd hole that handed a one-stroke victory to Player.

Fast forward a year and Palmer arrived at Augusta still steaming about his costly lapse and hell-bent on setting the record straight. Scores of 70, 66 and 69 gave Palmer a four-shot lead over Player going into the final round (the exact reverse of 1961), but fellow American Dow Finsterwald was sandwiched between them in second place, just two back. A closing 75 from Palmer, 73 from Finsterwald and 71 from Player meant all three players finished 72 holes tied on 280, eight under par. After a modest start to the tournament’s first three-way playoff, Palmer reeled off a blistering back nine of 31 for a 68 that sealed his third green jacket, and thus tied Sam Snead and Jimmy Demaret for the then record number of Masters victories. Player finished the playoff on 71 while Finsterwald limped in on 77.

Having turned professional at the end of 1961, Nicklaus won for the first time as a pro in spectacular fashion, defeating Palmer in an 18-hole playoff in the U.S. Open at Oakmont near Pittsburgh, where local hero Palmer was supposed to win and where the partisan support was vociferous.

Nicklaus, who had finished second and fourth as an amateur in the two previous U.S. Opens, displayed a fortitude that refused to allow the hostile crowd to break his concentration, and after six holes of the playoff he held a four-stroke lead. Palmer rallied but in the end capitulated by three strokes, 71-74.

Admiringly, Palmer noted that the crowd hadn’t fazed Nicklaus one bit but, as a staunch advocate of fair play, he was bothered by the abuse. Another thing that bothered him—although he never used it as an excuse—was a deep cut on a finger that had required stitches only a few days before the championship. One difference between himself and Nicklaus that Palmer did rue, publicly, was the number of three-putts they had on Oakmont’s treacherous greens. Whilst Palmer three-stabbed 13 times across 90 holes, Nicklaus only did so once. “I’ll tell you something,” came Palmer’s portentous and oft-repeated words after Nicklaus had won, “now that the big guy is out of the cage everybody better run for cover”.

Nicklaus was the youngest U.S. Open winner since Bobby Jones in 1923 and the first, since Jones in 1930, to hold both the U.S. Open and U.S. Amateur Championship trophies simultaneously.

When Palmer made his [British] Open debut in 1960 at St. Andrews, Australian Kel Nagle beat him by a stroke. At the 1962 Open at Troon on the west coast of Scotland, it was a role-reversal, with Palmer finishing first (his sixth major win) and Nagle second. This time, though, it wasn’t remotely close. Palmer led Nagle by five going into the final round and finished with a six-stroke victory. To underline the extent of his superiority that week, Nagle was a further seven shots ahead of the third-placed golfers, Phil Rodgers and Welshman Brian Huggett. It was Palmer’s second straight win in the game’s oldest championship, and his popularity that week with the spectators was such that the R&A were forced to introduce stricter crowd control measures. The roping-off of fairways and the fencing of course boundaries began a year later, after thousands of fans at Troon evaded the turnstiles and stormed the golf course from the beach.

A week after missing the halfway cut in The Open at Troon, the Black Knight was back on his charger and setting the record straight. The 1962 PGA Championship—Pennsylvania’s second major of the year—was held at Aronimink Country Club, Donald Ross’s masterpiece in Newtown Square near Philadelphia, that even in those days measured over 7,000 yards. It proved a fitting stage for Player’s third major victory, and the sixth of his PGA Tour career.

Trailing by one to Doug Ford at the halfway stage, Player edged ahead with a third-round 69 and went on to hold off fast finishing Bob Goalby by a single shot with a closing 70 for a 72-hole total of 278, two under par. George Bayer, who trailed Player by two after 54 holes, tied for third on 281 with Nicklaus who surged through the field with a final round of 67. Palmer, who won a total of nine times in 1962, was never really a factor, tying for 17th. 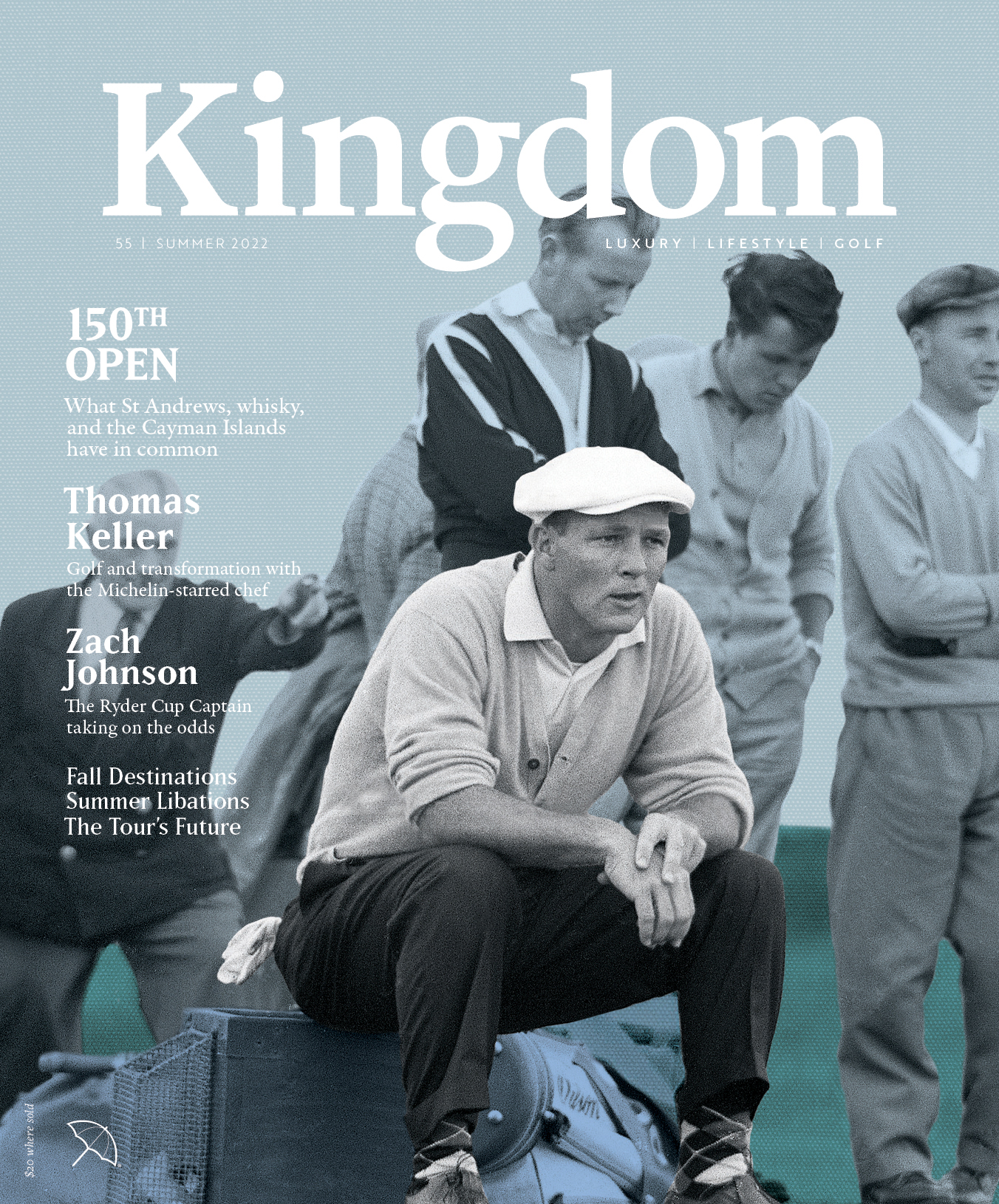