When a leading meteorologist couldn’t find a good umbrella, he built one—the best, in fact. Today, his company’s creations can be found on tour, on course, and anywhere rain is falling

When a leading meteorologist couldn’t find a good umbrella, he built one—the best, in fact. Today, his company’s creations can be found on tour, on course, and anywhere rain is falling

hen you’re in the market for a quality car, a few top marques come to mind. Likewise, with fine wine or Champagne, various labels stand out. The same goes for watches, jewelry, fashion, motorcycles, appliances, guitars, golf clubs, power tools, hotels and so much more. In nearly any category, certain brands are known as the best of the best.

But when it came to buying an umbrella, meteorologist Rick Reichmuth drew a blank.

Thus Weatherman was born. The company currently is celebrating its fifth anniversary, and its achievements in those five years are all the evidence one needs to confirm that Weatherman is making the best umbrellas on the planet.

“For five years, Golf Digest has called us the ‘world’s best golf umbrella,” Reichmuth says, deservedly proud. “A lot of teams carry our umbrellas: the last two Presidents Cups, the last three Ryder Cups—and that wasn’t a purchased-into thing, that was a choice. The men’s and women’s U.S. Olympic teams in Tokyo all had our umbrellas. To be at that level in five years, when you launch not even knowing if you’ll be in business in five years, that feels pretty good.”

It feels good to the [dry] customers who use Weatherman’s products as well. You might not give it a thought until you need it, but there’s an awful lot that goes into making an umbrella. Anyone who’s had a cheap one fail on them (which is basically everyone) gets a quick glimpse: the engineering and assemblage of the spidery skeleton with all of its little folding arms, the way they poke up through flimsy fabric when the whole mess starts to fall apart. The “launching mechanism” that’s meant to explode the canopy open brilliantly but which sometimes doesn’t quite get the job done, and there’s more: wind protection, how well the handle can be gripped, the materials and parts quality, and on and on, each component and effect another small detail to be considered. As it happens, Reichmuth and his team considered them all.

“I worked with industrial designers and we started pulling umbrellas apart in my apartment, just sitting on the floor pulling them apart—lots of them—looking at what makes them good, what makes them bad, how various things can be improved upon. It took a couple of years.”

In the end, the Weatherman team found a design and materials that worked, and today the results speak for themselves. Windproof up to 55mph, more coverage than other brands, reflective trim on the edges that provides safety in dark environments, an ergonomic handle with a comfortable grip, UV protection and other details, all backed by a lifetime warranty and a huge network of Weatherman users, including the aforementioned teams.

The company has a wide range of styles and collections, including affiliations with Arnold Palmer, the college community, a Patriotic line that has helped Weatherman donate more than $350,000 to date to Folds of Honor Foundation (which provides educational scholarships for spouses and children of America’s fallen and disabled service members and first responders) and more. With a variety of sizes and tailored applications (such as golf and travel), there’s sure to be a Weatherman for you. What’s more, for a limited time you can enter for a chance to win $500 worth of Weatherman umbrellas from the Weatherman x Arnold Palmer collection plus a subscription to Kingdom magazine—both of which are sure to be opening soon on a golf course near you.

ENTER FOR A CHANCE TO WIN

$500 worth of Weatherman® x Arnold Palmer collection umbrellas, including:

The Weatherman® x Arnold Palmer Collaboration pairs our award-winning Golf Umbrella with the legend’s charismatic personality and brings his iconic logo to life.

Recognized for sharp engineering and sophisticated design, Weatherman is a brand you can trust to deliver on durability, quality and most of all – complete protection from Mother Nature’s harshest 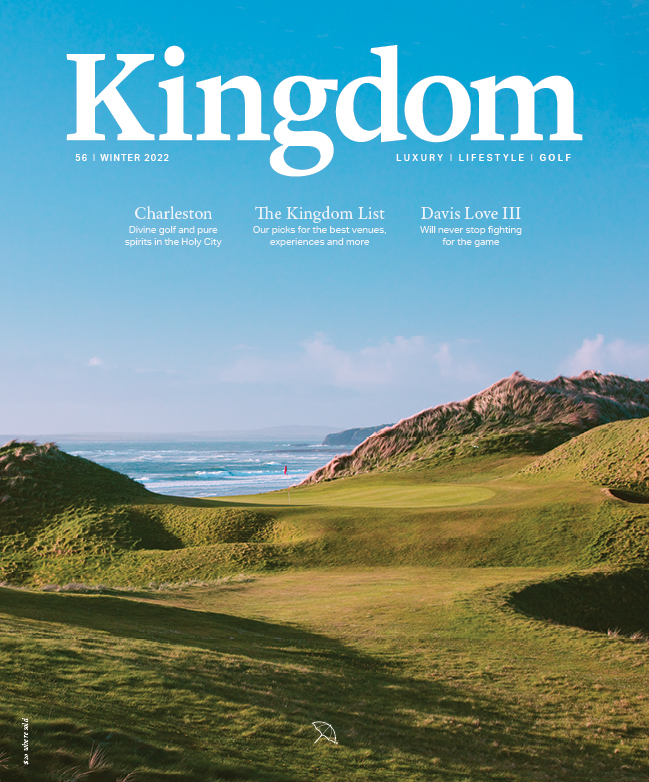